In 1961 Tommy Terrell, Eddie Terrell, and Johnny Robinson formed The Ramblers, a rock and roll band that played the current hits of the 60's. Those hits are now rock and roll classics and are still played authentically by the Ramblers today.

In 1979, the band regrouped as The Rambler Reunion Band adding Jim Burford on lead guitar to replace Van who died in a motorcycle accident in 1972. Chip moved out of state and was replaced by John Livingston on keyboards. Eddie rejoined the band to replace Chris who also moved out of state. During the 80's and 90's the band continued working around the southeast entertaining at events with their 60's music. 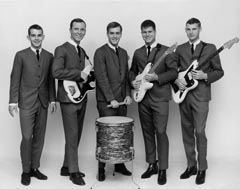 The Ramblers - You Better Run